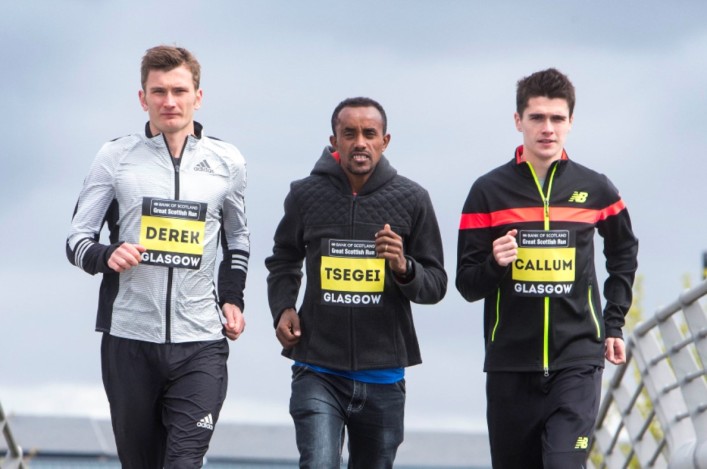 Listen to Callum and Derek in Radio Clyde interview

Callum Hawkins is ready to have a crack at the Scottish half marathon record later this year at the Great Scottish Run – if he’s recovered from the Olympics.

The GB international was speaking at the official launch for the series of events on the weekend of October 1/2 which will see thousands of runners take to the streets of Glasgow.

Scottish Half Marathon medals are up for grabs within the Great Scottish Run again for 2016 and Callum is well aware that Allister Hutton holds the National best for the distance at 62.28.

He was within eight seconds of that in Paris (62.36) earlier this year and arguably would have broken it in Cardiff at the World Half Marathon (62:52) but for some seriously foul weather affecting athletes on the last couple of miles.

‘I’d certainly think about having a go at that kind of time in the Great Scottish Run in October if it fits with my competition plan for that time of year,’ said Callum, selected for GB for the Olympics in Rio following his superb London Marathon performance and of course joined by his brother Derek and Shettleston’s Tsegai Tewelde.

‘It will depend on how I feel after Rio I would guess. That’s going to be my third marathon in less than a year after Frankfurt and then London so it will be much nearer the time before a decision is made.’

Derek, meanwhile, had good advice for club athletes or even new runners who are pondering a half marathon at the Great Scottish Run.

‘What could I suggest for those taking on a half marathon for the first time?’ he said.

‘There are two key points that I think people must remember.

‘The first is: don’t leave it too late to start training. If you have run 5K or even 10K you still need to do more for a half marathon and if you leave it to the last week then you are going to struggle. Two or three months out would be a great time to make a start and build up the mileage over a few weeks.

‘Secondly, on the day itself, don’t start too fast! With the excitement of the occasion and after waiting for the big day, it is very tempting. But it is a much better plan to get the first few miles in feeling comfortable and getting accustomed to just being in the race.’

Callum and Derek were joined at the launch by Tsegai Tewelde, the Eritrean-born athlete now qualified to run for GB. 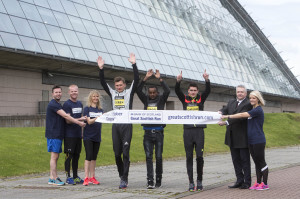 Scotland’s biggest weekend of running, which this year will be staged on October 1/2, will feature up to 30,000 runners of all ages and abilities and the half marathon will be televised live on BBC TV.

Starting at George Square in the heart of Glasgow, the Bank of Scotland Great Scottish Run sees runners follow the iconic 10k and half marathon routes through the city before they enter Glasgow Green and reach the tree lined finish straight in the shadow of Nelson’s Monument.

Mark Hollinshead, Chief Executive of organisers the Great Run Company said: ‘Callum, Derek and Tsegai all ran outstandingly well in London and did Scotland proud. We are delighted that they are set to become a part of the Bank of Scotland Great Scottish Run weekend following Rio.’

Bank of Scotland has sponsored the event for eight years and this will be their second year with BBC Children in Need as its chosen charity of the year.

Mike Moran, Director of Community Network, Bank of Scotland (Retail), will be taking part in the event this October. He said:  ‘This will be my fifth year running in the Bank of Scotland Great Scottish Run.

‘I love taking part in this event as it brings thousands of runners of all levels together and year on year it raises an incredible amount of money for many worthy causes.

‘Alongside hundreds of my Bank of Scotland colleagues I will be proud to run on behalf of our Charity of the Year, BBC Children in Need. It will push me across that finish line knowing that every pound I raise will make a worthwhile difference to disadvantaged children and young people across the UK.’

Deputy Leader of Glasgow City Council and Chair of Glasgow Life, Councillor Archie Graham OBE, said: ‘The Bank of Scotland Great Scottish Run is one of the highlights on Glasgow’s annual sporting calendar, bringing together thousands of people of all ages and abilities for a an incredible weekend of running.

‘As well as being Scotland’s largest mass-participation running event, it is also always hugely inspiring. Each and every participant has their own unique story.’

For more information and to enter the Bank of Scotland Great Scottish Run visit www.greatscottishrun.com