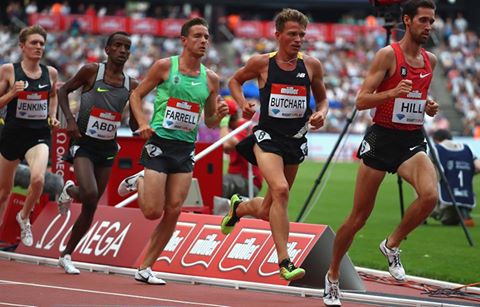 Rio-bound Andrew Butchart delivered a top-class performance at Diamond League level to close the Anniversary Games in successful style for the Scottish contingent.

And Para athlete Libby Clegg claimed a World Record in her event – following reclassification to T11 prior to her London 200m run with guide, Chris Clarke.

Butchart was desperately close to his Scottish Record at 5000m as he was next man home behind an imperious performance by Mo Farah.

Farah broke 13 minutes but Butchart somehow came up with a faster last lap – 56.6 – to be ‘best of the rest’ and beat the likes of American trials winner Bernad Lagat to take second in 13.14.85.

With Laura Muir a winner, Butchart’s second place matched that of Lynsey Sharp in the Women’s 800m. Also on Saturday, Kirsty Law was 8th in the discus (52.31m)and Lennie Waite was a DNF in the 3000m steeplechase.

Friday night fourth places for Eilidh Doyle and Jake Wightman on the Saturday made the overall picture pretty bright indeed for this kind of level of meet (although not every race/event was Diamond League).

‘I have been at altitude so it felt like I had a little more left in the tank, I broke away and managed to have enough energy to last me until the end,’ said Butchart.

‘I have never experienced a crowd like this in my life, if I can experience that again in my lifetime I’ll be delighted. I have been at altitude for the last four weeks and know I am in shape, it gives you something of a boost and feel like you can breathe easier. I want to make the final (in Rio), I think the race could be something similar to that.

‘I have been in Fort Romeu (with Mo) and the guy trains like an animal, and some of the guys racing tonight are extremely talented so I’m delighted to beat them.’

‘I am in good form at the moment and felt good but Shelayna was just stronger in the home straight,’ said Lynsey.

‘Endurance running in Britain is so strong at the moment. Scottish distance running in particular has come on a lot, Laura Muir ran a British record last night so there are some good results coming through.’ 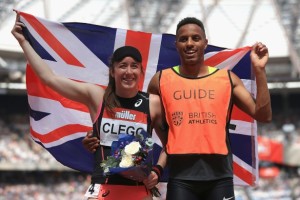 There was also a new T11 200m world record for Libby Clegg, who is coached by Joe McDonnell, as the sprinter raced away to a convincing win stopping the clock at 24.44.

Having been reclassified recently to a T11, the Commonwealth Games gold medallist was in top form.

‘I am absolutely gobsmacked at how I have performed, I can’t believe it,’ said Libby.

‘I have been getting better and better with every race and I’m loving every minute of it so far. I have got high hopes for Rio and am feeling really positive about it. I am aware that most of my competition are Brazilian but I think it’ll be really exciting and I can’t wait to get there.’

Jo Butterfield picked up a win in her F32/51 club throw event with a Meeting Record 22.02m