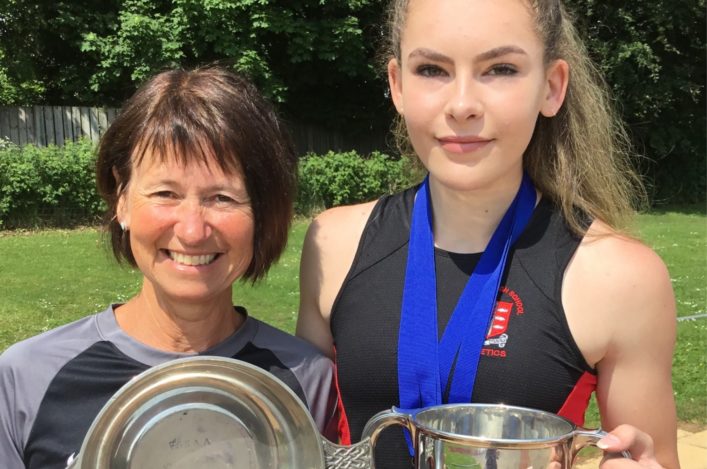 Ellie O’Hara is pictured with her coach Linda Nicholson after winning the Frances Barker Shield for best female performance at the Scottish Schools with Age Group Record and CBP in Triple jump, gold in long jump and silver in 100m

The Scottish Secondary Schools track and field championships enjoyed good conditions at Grangemouth over Friday and Saturday – and there were some fine performances.

Prominent among those would be three age group records (subject to ratification) which further improved standards achieved by young Scottish athletes down the decades.

us of three fine performances by young athletes at the Scottish Schools Champs at Grangemouth over the past couple of days,

Ellie O’Hara pushed on still further her U17 National Record for Triple Jump with 12.30m improving on a recent 12.14m performance at Bedford.

Alexander Poustie-Williamson clocked 36.50 for U15 Record for 300m and, in the shot putt, Meghan Porterfield is now at 12.20m for a new Scottish U13 Record in that event.

Thanks to Rotary International across Scotland for their support of school athletics. And many thanks to all volunteers and Officials who make sure this great development event happens every year.

Scrolling through 42 pages of Results, think we spot Championship Best Performances by the likes of Keira Waddell in javelin; Kirsty Costello in hammer; Jamie Burns over 3000m; Scott Brindley in the pole vault, Vivian Duruh in shot putt and Calum Henderson in long jump, and Dylan Thomson in the pole vault.

Provisional Results are now online on the Scottish School website 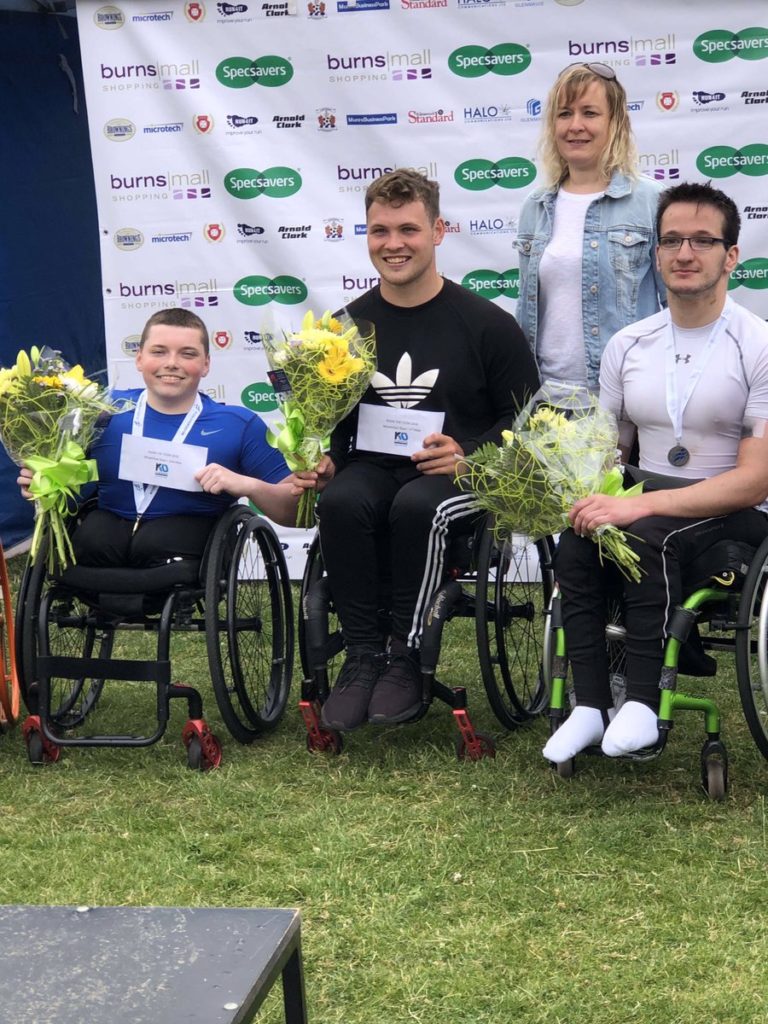 The Scottish Wheelchair 10K Champs were held as part of the Roon the Toon 10K event in Kilmarnock on Sunday.

The race was won by Ben Rowlings of Coventry Godiva Harriers in a course record 26.51, and the women’s race by Murran Mackay of Red Star AC in 53.31.

The Men’s Scottish 10km Wheelchair Championship was won by Kyle Brotherton of Red Star, who was second in the race, with 27.05 and silver medal going to Sean Frame of Red Star in 27.06. First U20 and bronze went to Luke Deighan of Red Star with 30.41.

With thanks to Ian Mirfin and Colleen Tait

The second Scottish Men’s League match of the season was held at Aberdeen.

Shettleston’s Mike Deason came up with a 9.29.74 3000m steeplechase which is second best on the Scottish rankings for this year.