Kathryn so proud to return . . . after seven years 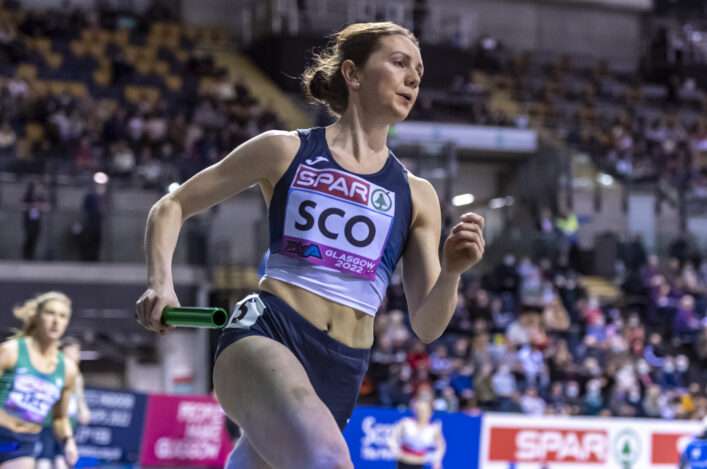 Selman delivers at double as Scotland savour the DNA experience

So it was perhaps no surprise that the sprinter felt a little emotional at wearing a Scotland vest once again to compete in the 2x2x200m Relay (alongside Murray Fotheringham) at the DNA Athletics event in Glasgow.

Kathryn, now 27, competed for Scotland at the same Emirates Arena venue some seven years ago early in 2015 and could not have envisaged then the fitness fight to be endured via surgery on both feet.

It is to the immense credit of the Banchory Stonehaven athlete that she’s still on her athletics journey and now looking forward to a return to Scottish championship competition later in the year after winning a number of medals early in her career.

‘I competed for Scotland at an indoor match at the Emirates early in 2015,’ said Kathryn.

‘The years in between have been hard, yes. Just to be back at this kind of level, racing for Scotland in front of a crowd, means an awful lot to me.

‘It has been a hard journey (with surgery to both feet). Coming back feels good and I love the sport. To come back in a team race in a team event was good because it means you don’t think quite so much about yourself.

‘The recovery after each of the surgeries just took far longer than we ever thought it would. And then the pandemic hit a number of events and championships which I might have featured in.’

The 2x2x200m Relay, with each athlete racing one lap of the Emirates Arena twice, was just one of the events ‘tinkered with’ as DNA Athletics seeks a novel approach via a two-hour format.

‘It was weird,’ smiled Kathryn.

‘There is so little time between the two runs. You run a 200m leg and then you have to get in position to do it again.

‘My legs held up slightly better than I thought they would and I am happy with it and Murray and I got the baton round, which is the main thing.’

Alisha Rees raced in a more conventional event – the Women’s 60m sprint, as she clocked 7.36 seconds – but was positive about the DNA Athletics idea and general principle: to try and make indoor athletics into a shorter, sharper, more dynamic event.

‘We all feel it is a good idea,’ said Alisha, who was our Scotland captain for DNA.

‘I think for people who don’t normally watch athletics, or who might be new to the sport, I think it was a good event to try and get people engaged and interested.

‘It is a fun event and it was good of Scottish Athletics to have the DNA Kids SUPERteams for U12s immediately beforehand.  I think that’s good for the sport.

‘Not having qualifying rounds on the track is so different to championships and the field events were very different, too.

‘You had to, as an athlete, try and get your head right and thing ‘it’s one race right now and that’s it for today’. It was nice to mix things up a bit and you try and learn from each experience. 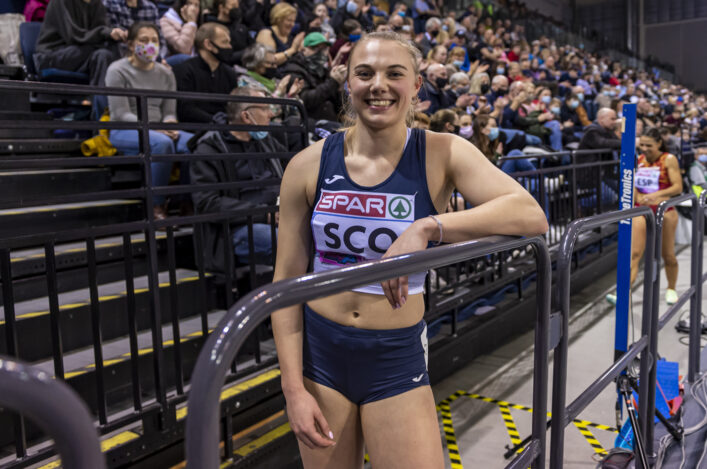