Jake Wightman’s weekend break at the Lindsays Short Course XC Champs probably didn’t quite go the way he had hoped.

But there were still a couple of lighter moments for the Olympic 1500m finalist and a positive vibe about the sport in Scotland.

Jake travelled to Carlisle on Friday before then making the shorter trip to Lanark to race the 4k distance watched by his partner Georgie Hartigan and dad/coach Geoff.

‘That just shows me where my fitness is at the moment after an end of season break,’ he said after a 14th place finish.

‘There was really good depth in the Men’s race today as I discovered. I haven’t done cross country in a long while and I enjoyed coming back.

‘But what I feel is that when I did this the last time a number of years ago I was at a similar level of fitness and finished higher up the race. I think this time there are a number of guys running well in Scotland and three or four U20 athletes were very prominent, too.

‘That is a real positive for the sport and the turnout – in pretty grim weather – was terrific as well. The warm welcome to the likes of Laura (Muir), Andy (Butchart) and myself was lovely, too.’

Jake warmed down with Butchart and may have had the chance to have a laugh about his borrowed Edinburgh AC vest.

‘I had to ask the club for a vest today and they gave me one autographed by Josh Kerr from his visit back to the club a couple of months ago,’ he grinned.

‘It didn’t prove my lucky vest and I will be messaging Josh to tell him.’ 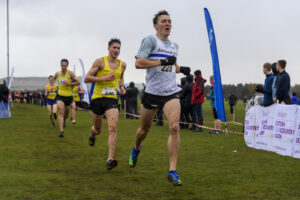 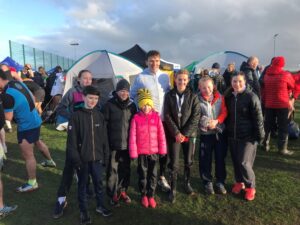 Road Running and Cross Country Commission (link to The Archive)

If Jake was impressed by the quality then the overall growth in the Lindsays Short Course XC event is definitely an encouragement for all who love our sport.

On Friday on our Facebook page there was a message for Bobby Quinn about winning the event when it was first staged – back in January 1999 at Pollok Park in Glasgow.

A quick perusal at details on the Road Running and Cross Country Commission website (which is comprehensively and studiously administered by Ron Morrison and Alex Jackson) showed the finisher numbers that day 24 in the Women’s race and 67 in the Men’s.

Come Saturday and those figures were 220 and 420 respectively (although unofficial at the moment). We reckon the overall numbers at Lanark were only topped in 2018 and 2019 and, in the first year after Covid issues, that’s a very decent platform.

The 220 finishers in the Senior Women’s race is the second highest figure in this event (with only Kirkcaldy two years ago higher).

It takes a huge team effort to deliver on such occasions and thanks are due to host club Law and District, South Lanarkshire Council and all our Endurance Officials and other volunteers for making Lanark happen.

Really, it was a day when our sport was the runaway winner.

Scotland international and Shettleston Harriers athlete Lachlan Oates is no stranger to a cross country podium.

In fact, Lachlan has an excellent record including a bronze and a silver at the National XC and a silver medal in the Short Course at Kirkcaldy back in 2017 as well as Inter-District XC success.

But third place in Saturday’s stacked Men’s race is bound to feel very good on a day the competition was so intense that places in the top ten were precious never mind the medals.

‘Lachlan is delighted because everyone knows the quality of the field today,’ said dad John later.

As it happened, John himself was part of that field wearing the Shettleston colours and himself enjoyed a medal moment – taking a bronze medal in our M60 category behind the runs of Jeff Farquhar (Pitreavie AAC) and Paul Forbes (Edinburgh AC).

Did he know Lachlan was having a good run up ahead?

‘My wife did shout something but you don’t really hear it in the wind or take it it, to be honest.’ he said.

*Check out this wee piece via BBC Scotland on Lachlan and John from a couple of years ago.

Thanks to the really sporting father and son duo John and Lachlan Oates of @ShettlestonHarr for allowing @HDewarSport and me to interrupt their #LindsaysXC Scottish Championships preparations at Falkirk on Saturday. @scotathletics Top athletes and top gents. pic.twitter.com/jSqcGwwxR2 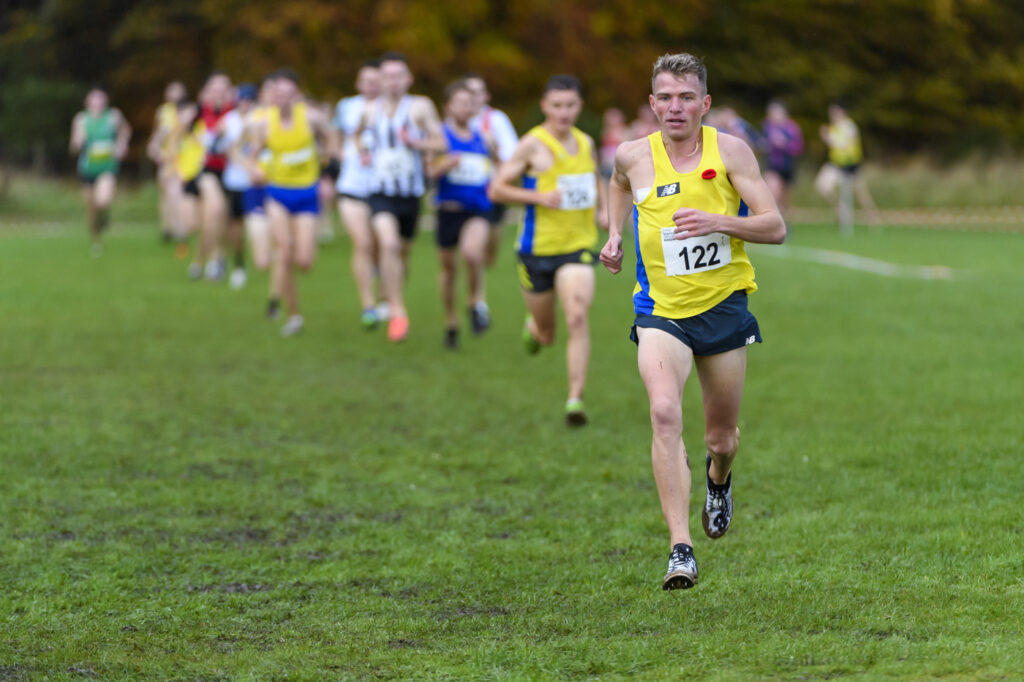 Lanark Racecourse will have played host to some short-odds winners down the decades and, had the bookmakers been on site on Saturday, they may have suspended betting on Central AC for the Senior Men’s team race.

The #YellowTrain duly scored just 23 points via their top four finishers with silver medallists Edinburgh Uni and bronze medallists Cambuslang Harriers both in the 80s, with only a single point between them.

Jamie Crowe backed up Andy Butchart for silver with U20 champion Ben MacMillan in fifth place and Tom Graham-Marr making the team at 15th.

Once again the depth and quality of Central AC men continues to evolve and adjust, as Butchart highlighted in an interview in the Herald on Saturday.

‘It has been brilliant for me (returning to club training) because the young guys are so hungry and so desperate to beat me in every session,’ said Andy.

‘These are becoming some of the toughest sessions I’ve done and I’m having to work hard to keep ahead. There are promising young athletes (at Central AC) and everyone is benefiting from it.

‘Coming back to the club seemed the obvious thing to do and it is very pleasing if I’m able to push others on, too.’

I’m a 40 year old mum of three, and today I toed the same start line as Olympian @lauramuiruns – now tell me Cross Country isn’t the best sport in the world! Another fantastic day out with @scotathletics and @Central_AC at the Scottish Short Course Champs 🏃🏻‍♀️ https://t.co/h545m0LjTj

Still on a Central AC connection, and the Tweet above from Claire Houston probably captures best the feeling for many at the presence of Olympians in their midst.

Laura, Andy and Jake posed for countless photos – sometimes even interrupting their warm-up or warm-down plans and their involvement is hugely appreciated.

Laura, incidentally, had this to say when asked if we might see her one day on the start-list for the Lindsays National XC – albeit a few years down the line.

‘I love the National XC and everything about that day so it is definitely one that is on my bucket list in terms of races,’ she smiled.

After five Short Course titles for Laura, what an exciting prospect that is! Let’s pencil it in for 2025.