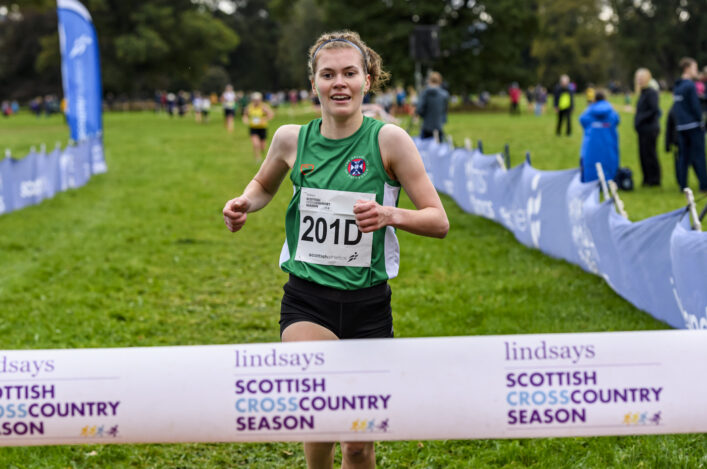 Respected Scottish sports journalist Hugh MacDonald attended our Lindsays National XC a couple of years ago and declared the spectacle he witnessed at Falkirk as ‘life-affirming’.

It felt the most fitting description on Saturday, too.

The impressive façade of Scone Palace provided a fitting historical backdrop and the rolling farmlands of Perthshire delivered an ideal relays course.

And so the Lindsays National XC Relays made a successful return after a two-year absence and a long stretch of being staged at Cumbernauld.

The whole #SALtogether atmosphere was summed up by the efforts of all our Officials, host club Perth Road Runners (who won Men’s V50 golds to top off their day) and GB international Andy Douglas volunteering as a race marshal.

Megan Crawford‘s dog made yet another podium photo and, when the question was asked which leg the dog had run, the reply was: ‘Pretty much all four of them . . .’

If the venue had changed, and the course altered from our visit to Scone last December,  then the colour of the vests visiting the podium were in many cases the same.

Indeed, Central AC and Edinburgh Uni Hare and Hounds repeated the team golds they won at Cumbernauld back in 2019 before Covid-19 issues put paid to last winter’s National Championship event. 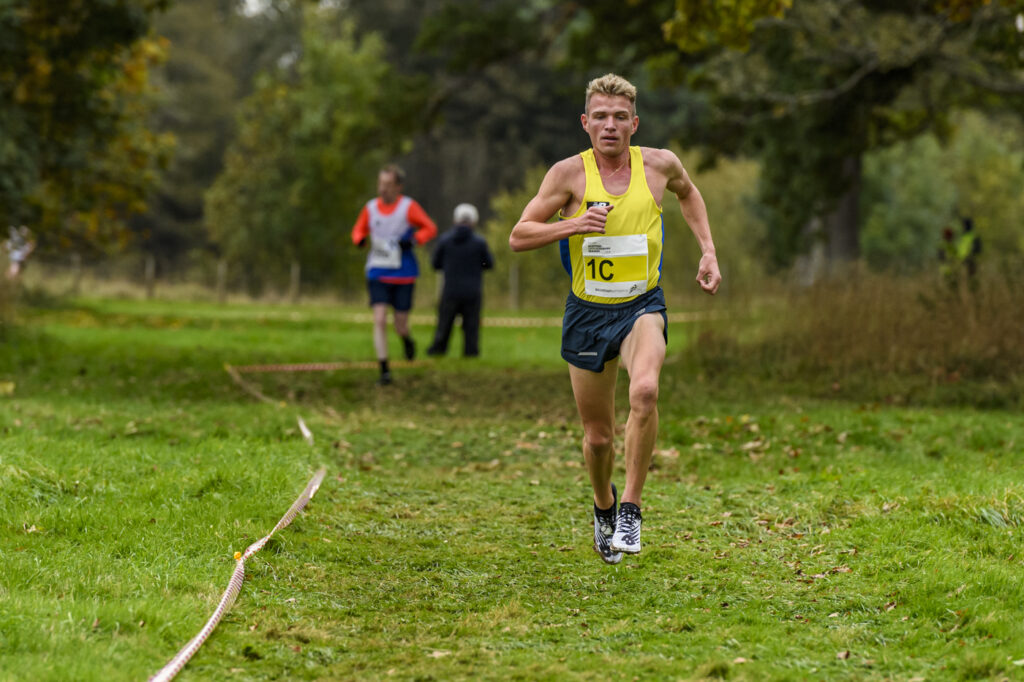 We will look at the age group races in a separate report, so let’s start at the finish and a remarkable day for Central AC’s men as they took those golds and also the silvers as their B team proved anything but second best.

Inverclyde AC completed the podium with the bronzes and these two clubs are in fact the only winners of the Senior Men’s contest every year since 2010.

The ‘race’ for the golds was effectively over after two laps after strong runs from Hamish Hickey and Ben MacMillan. Handing over to a double Olympian in Andy Butchart and the current National XC reigning champion, Jamie Crowe, allowed them a carefree run for home.

Behind them, the Central B team of Cameron Milne, Calum Philip, Luca Fanottoli and Tom Graham–Marr ultimately had enough to see off the threat of the Inverclyde quartet of Sean Fontana, Ben Potrykus, Ross Gray and Jonny Glen.

‘It’s a great day for the club to have two teams on the top two places on the podium,’ said Crowe, who raced the London Marathon only a fortnight earlier.

‘We actually missed the big man, Alistair Hay, today as he had to call off sick in the morning. I’m sure he will be back and then you think about others like Conan McCaughey in Ireland and Aidan Thompson in America and we’re really pleased with the depth.

‘It was good to race here again after last season and I like it as a venue. It’s been a good course to me but Hamish and Ben  had set it up so well for Andy and myself.’

Central coach Derek Easton believed it a first 1-2 for the A and B teams at the club and was naturally delighted.

In that Men’s race, there were superb individual leg runs from Christian Graham of Lasswade and Duncan Robinson of Giffnock North, with both timed at 11:28 for the course of around 4k. 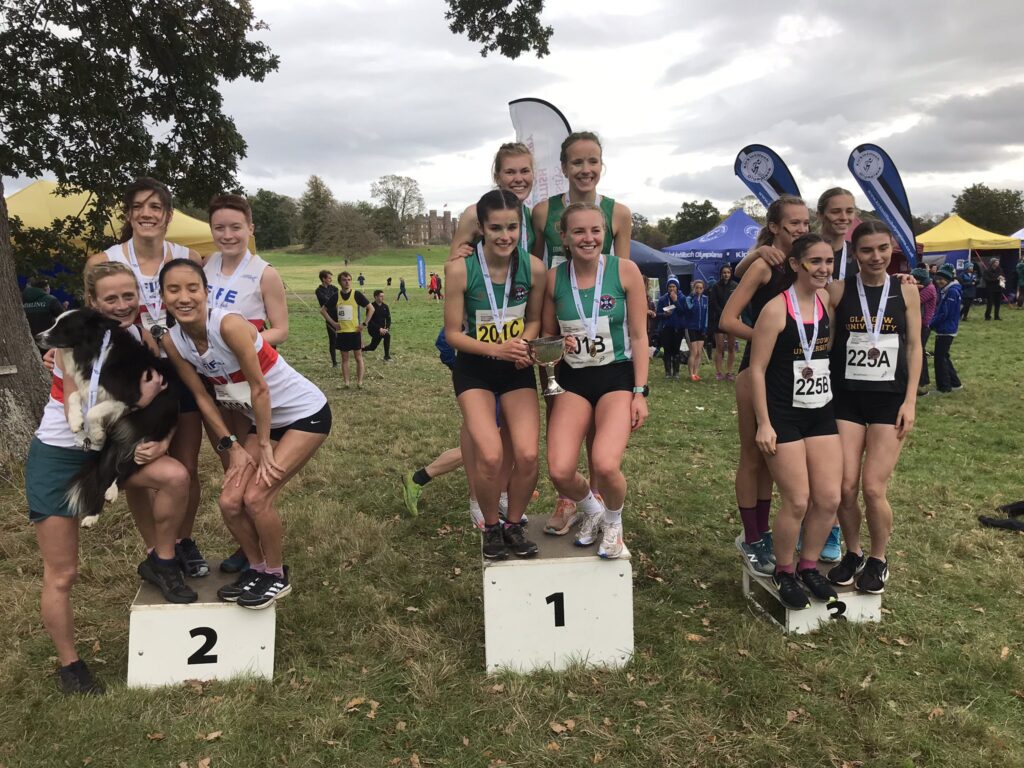 As yellow continues to dominate the Men’s scene, the Women’s race went green once again.

Edinburgh Uni Hare and Hounds are starting to monopolise the golds here rather like Central.

Victory in 2021 was a fifth in a row for the students who were bolstered on a final leg by Megan Keith, with the Inverness Harriers runner having won in Cardiff a week earlier at the British Cross Challenge.

That was in fact a best-ever performance in this event for Fife AC women. Glasgow University took the third with Eloise Walker and Erin Wallace book-ending runs from Aoife Carr and Stephanie Tucker.

‘It’s my debut in the green vest for Edinburgh Uni Hare and Hounds and it was a great way to start,’ smiled Megan.

‘That’s five in a row for us as a club I believe and it is a strong group of athletes this year.

‘I thought Scone Palace could work for a National event when we raced here last December and I think everyone enjoyed the venue and the atmosphere this time around.’ 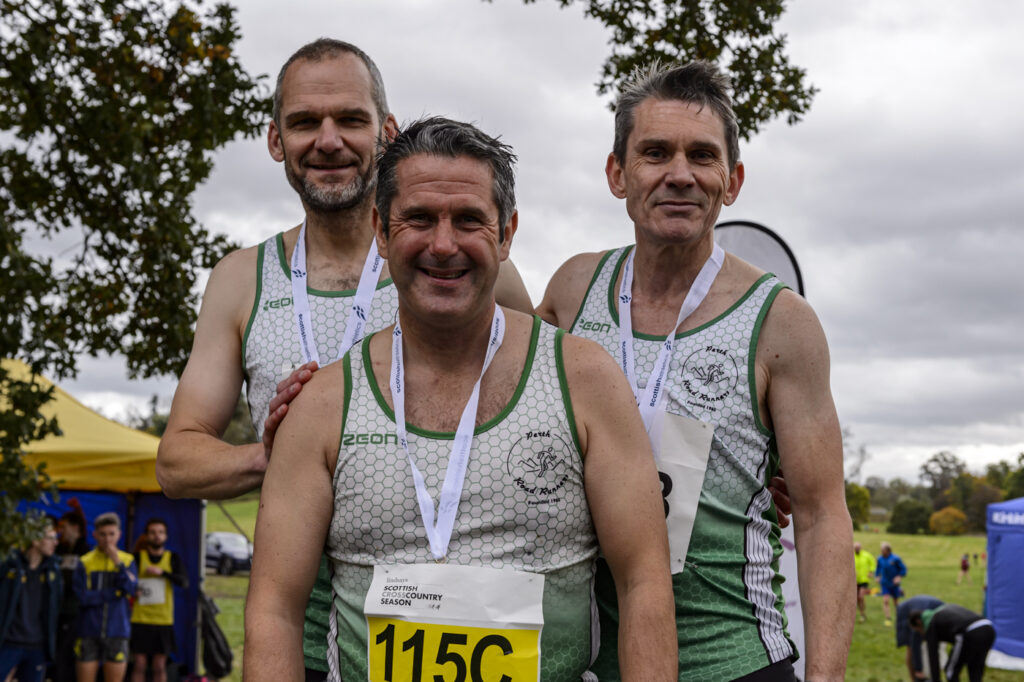 Edinburgh clubs were firmly to the fore in the Masters races.

Hunters Bog Trotters won the Women’s V40 race thanks to the efforts of Eilish McKechnie, Claire Gordon and Jill Stephen.

Bellahouston Road Runners took the silvers and Garscube Harriers were our bronze medallists.

In the Men’s Masters race, the winners were Edinburgh AC thanks to good runs from Stuart Johnstone, Mark Thornton Smith, Leon Johnstone and Ewan Cameron.

Cambuslang Harriers followed EAC home to take silvers and there was third place in that race for PH Racing.

Giffnock North won the V50 Women’s race from Edinburgh and then Gala. 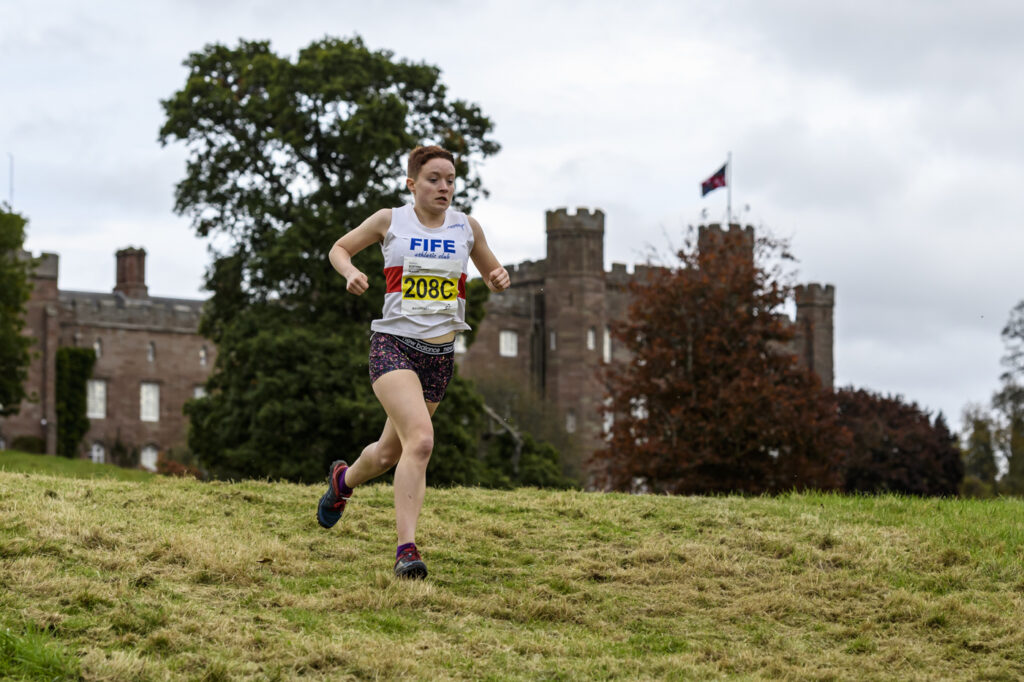