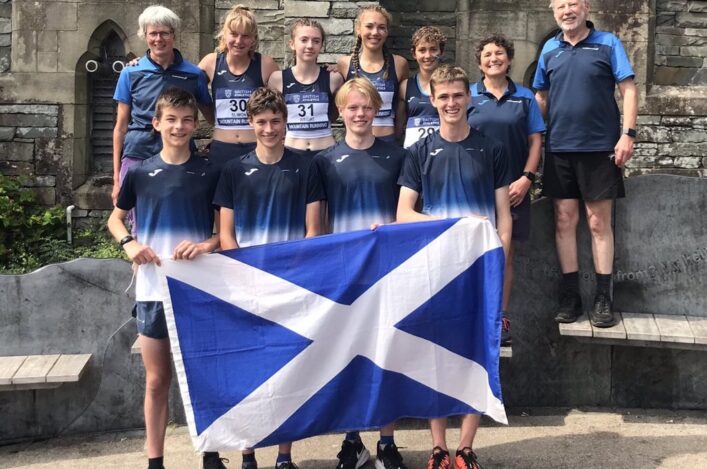 Team photo via Twitter, with thanks to Andy Macdonald

It was the Mountain Running Home Internationals at Ambleside – and Scotland took team golds in both U18 races.

Isla Hedley won the individual gold in the U18 Women’s race with her sister, Anna, taking the bronze medal, too, in a great effort by the Fife AC duo.

And Fraser Gilmour of VP-Glasgow took gold in the U18 Men’s race to also lead home Scotland. Struan Bennet, another Fife AC athlete, took fourth place in that race.

The team races were very tight in terms of the points for the top three placed athletes – with Scotland beating England by a single point in both races!

For a number of these young athletes, this was a first experience of wearing the Scotland vest and they can feel delighted with their collective efforts.

With thanks to Mike Pearson (Team Manager)

The Campus 5K event in Inverness delivered another high calibre road running event in the North of Scotland.

And it was a Central AC duo who benefited as Morag Millar and Jamie Crowe took victories in fast times.

Morag followed up her superb track performance the previous week with 15:55 on the roads in Inverness and Jamie was quicker than he has been over 5000m on the track this season with 14:02.

Well done and thanks to all athletes and officials and to Ross Cairns for organising.

It is rarely we would highlight one performance from a BMC meet, such as Saturday evening’s event in Loughborough.

But we will make an exception to applaud a superb A race 1500m victory for Ben Greenwood in a new PB of 3:41.76 – stripping almost seven seconds off his previous mark from 2018.

Ben clocked a new 800m PB at the British Champs last month after a four-year wait and it is very obvious hard work with coach Carol Sharp is paying off for the Perth Strathtay Harriers athlete.

Few things we like better than seeing athletes make real progress after proving their mettle by ‘sticking around’ through difficult times and absolutely sure some of that applies here . . .