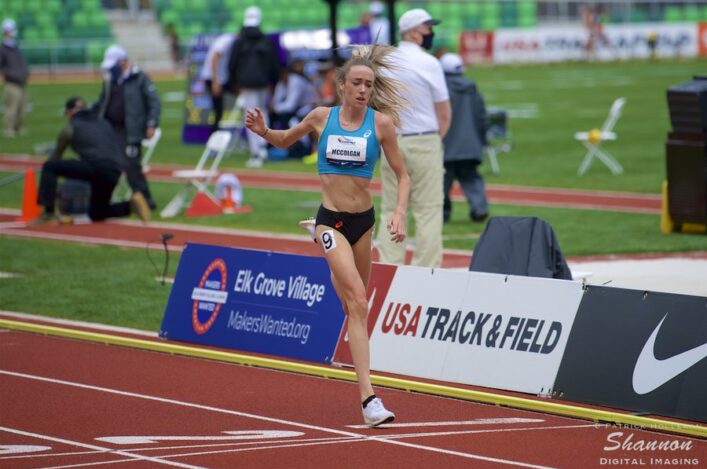 There were impressvie wins in the Continental World Tour event in Eugene for great Scots – Laura Muir and Eilish McColgan.

And a second place, by just one hundredth of a second, for Jemma Reekie made it a very promising start to the outdoor season in Olympic year for Scottish women.

Laura opened up her outdoor season in characteristic winning style in Eugene at the Continental World Tour event.

The Scot completely dominated the Women’s 1500m race from start to finish in a solo run 4:01.54. It was run in that trademark style with Laura winning by almost three seconds from American athlete Helen Schlachtenhaufen (4:04.36)

Eilish won the Women’s 5000m with a run of 14:52.44 with a very solid performance after a recent spell of training in America.

Not a bad night in a global context for Dundee Hawkhill Harriers and well done to both athletes and their families and coaches!

Loved racing at Hayward Field today! 😍 Happy to take the win with a sub 15 clocking, and a solo run over the final 3K. 💪

The World Champs are to be hosted here next year…so I'm keeping my fingers (& toes) crossed we can come back and do it all again in 2022. 🤞 pic.twitter.com/a0ICbpHjCR

Jemma was so close to making it a hat-trick of Scottish successes in Oregon but ultimately had to accept second in a Women’s 800m which became a burn-up over the last 200m or so.

The Kilbarchan AAC athlete lost out on the line to GB team-mate, Adelle Tracey, who clocked 2:03.25 to Jemma’s 2:03.26, with highly-rated American Raevyn Rogers pushed back into third place.

Nonetheless an encouraging opener from Jemma who has been training with Laura in the States in recent weeks.