Nikki Manson has made her debut as an ‘event organiser’ over the past few months in a part-time role as an athletics administrator with the Glasgow Athletics Association.

In that role, she’s had recent experience of handling prize pot shares to athletes.

So there was a certain symmetry in the GB international high jumper sitting on Saturday night in pole position in the race for £2000 at the Scottish FPSG Senior Champs at Grangemouth.

Nikki cleared 1.87m to hit the prize pot standards set by scottishathletics and she even had three attempts at 1.92m – which would have been a new Scottish Record.

It was a good competition despite the blustery conditions at Grangemouth, with Emma Nuttall clearing 1.82m as she took the silver and Emma Canning at 1.67m for the bronze.

‘I am really pleased to win and get a Season’s Best in the Scottish Champs,’ said Nikki.

‘It sets me up for the British Champs next weekend. I’ve been third there three times in the past so hopefully I can try and make the podium again, although the competition is tough. I do feel I’m coming into form at the right time, though, and this is a confidence boost.’

Video interviews on our You Tube channel

The 100m finals saw Katy Wyper made it three-in-a-row in the Women’s 100m final. The Blackpool-based Scot clocked 11.85 to take the gold as Edinburgh AC’s Katie Purves just edged out Chloe Lambert of VP-Glasgow for the silver – with 11.95 to 11.97.

Michael Olsen had looked favourite throughout the day for the 100m, with a fine 10.37 run in the semis. He replicated that with 10.38 seconds in the final to win and was well clear of the challenge of silver medallist Greg Kelly (East Kilbride AC) 10.78 and Stephen Dunlop (Kilbarchan AAC) 10.84.

Jax Thoirs came into the event in good form after that event win for Scotland at the Manchester International – and followed it up be retaining his pole vault title.

It was a Championship Best performance at 5.33m – bettering his own leap from two years ago at 5.32m – and he will head to the British Champs in good form. 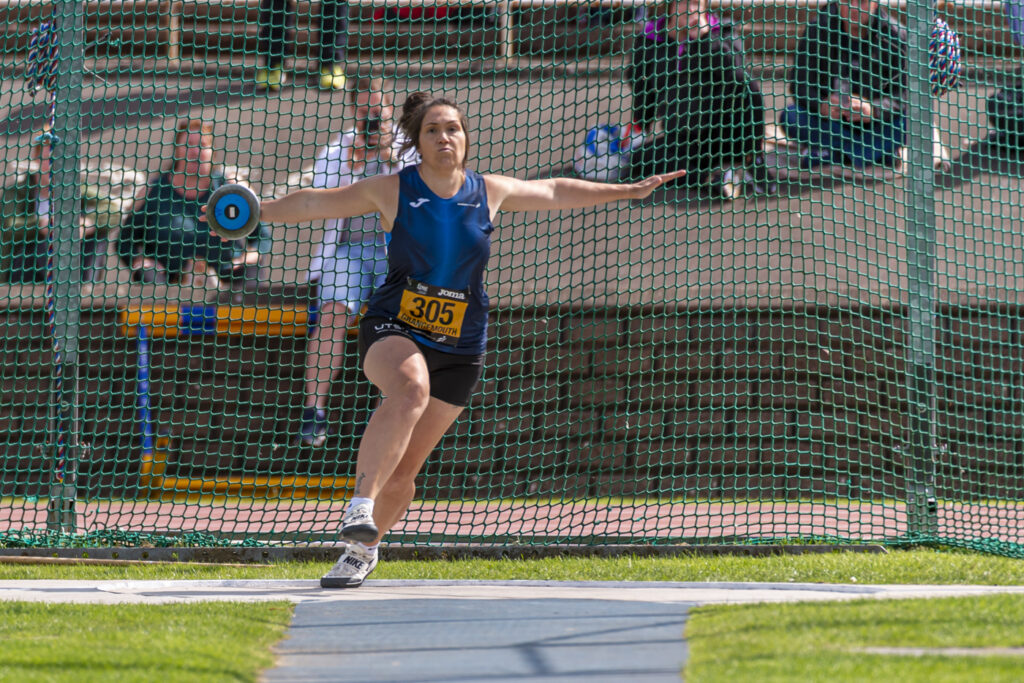 Kirsty Law won her 12th Scottish discus title but was disappointed with her 53.28m distance, on her opening throw. With the prize pot at 54m, Kirsty had hoped to be among those sharing that windfall.

‘I keep coming back here because I do like the status as Scottish champion,’ she said. ‘It wasn’t great today by any means but I didn’t feel I was doing too much wrong with the throws – the wind was all over the place at times.’

It was a similar story for Chris Bennett. He retained his hammer title with a best throw of 68.29m but fell short of the 71m line which would have earned him a share of the prize pot. Mhairi Porterfield won the Women’s shot with 13.54m – again a successful title defence.

Greg Millar retained his javelin title – as he responded to the threat of silver medallist Adam Boyle.

Trailing the U23 athlete after three rounds, the champion edged ahead and then came up with a 64.36m throw in his final round to make sure.

‘It was only my fourth competition of the season after a few problems with my elbow,’ he said. ‘I’m pleased with a Season’s Best performance and Adam put me under a bit of pressure which actually helped me. ‘

Annabel Simpson of Fife AC was the first Senior gold medallist on the track as she won the 5000m.

Annabel has recently joined the scottishathletics Marathon project with a view to the roads in a couple of years and here she pulled away from U20 champion, Cera Gemmell of Team East Lothian over the final two laps.

In another distance final, Mike Deason retained his 3000m steeplechase gold with a strong run for 9.18.08. 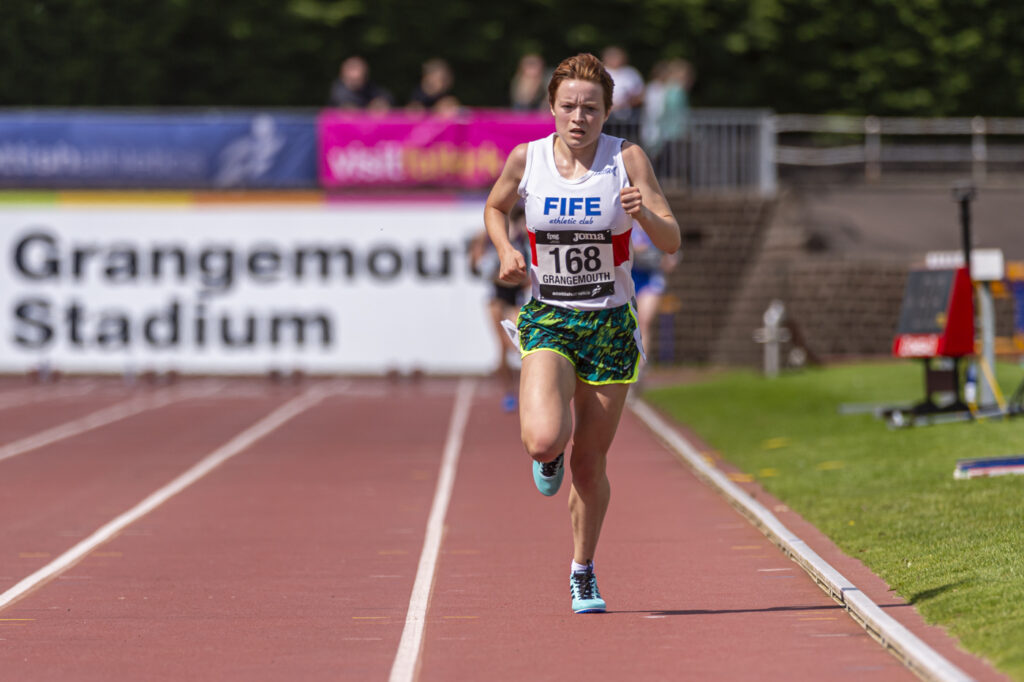 Triple jumper Zara Asante came close to a win for Scotland in the Manchester International when she finished second on countback but she was the clear winner at Grangemouth with 12.89m.

Nony Mordi took silver with 12.28m and that was a lovely moment for the Fife AC athlete – after being out of the sport for five years.

‘I’ve moved back to Scotland from England and after a lot of change in my life I’m looking for things I enjoyed before and that means athletics,’ said Nony.

‘The last time I did Triple Jump was way back in 2014. I was in touch with John Scott and started training again. Last week, I had to buy a pair of spike in order to compete here!’

Pitreavie AAC’s Chuxx Onyia leapt to 15.34m to win the Men’s event – for the 11th time in his career!

Glad to win my 11th Scottish Triple Jump title today. The last 18 months have been challenging and quite difficult, with injuries (knee, hamstring and ankles), but the mind remains strong and willing to strive and deliver when it matters!#thankGod #alwaysgrateful #triplejump pic.twitter.com/RbnVDehB9P 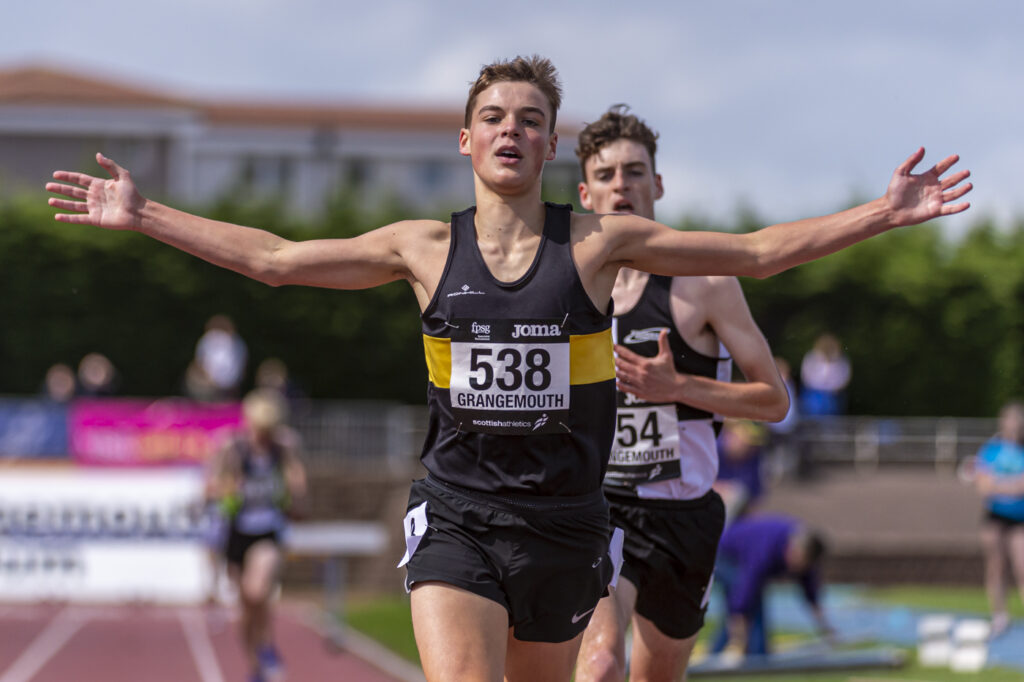 Callum Little takes gold in the U17 Men’s Steeplechase final

The Scottish U17 programme is split over two days at Grangemouth and there were some fine performances on Saturday – including Championship Best Performances for 4J National Academy athletes, Reuben Nairne and Ellie O’Hara.

Nairne has had a fine season at U17 level and the pole vaulter duly achieved a CBP as he took gold at Grangemouth. The Giffnock athlete’s 4.50m clearance was a solid showing on a windy day.

Likewise, O’Hara had to settle for a CBP of 12.28m in the Triple Jump with the Edinburgh AC athlete looking ahead to the England Athletics champs in a couple of weeks,

‘I’m competing in Triple and Long Jump at Bedford and it should be exciting – I’m ranked No 1 for Triple and I think at No 3 for Long so it is case of going there and trying to perform to my best and that will pretty much finish the season for me,’ said Ellie.

Falkirk Victoria athlete Callum Little won the 1500m steeplechase final after a great battle with visiting English athlete, Patrick Mochan of Swindon, with less than a second between them.

In the field, there were gold medals for Scottish athletes as follows:

On the track, there were gold medals for Scottish athletes as follows: 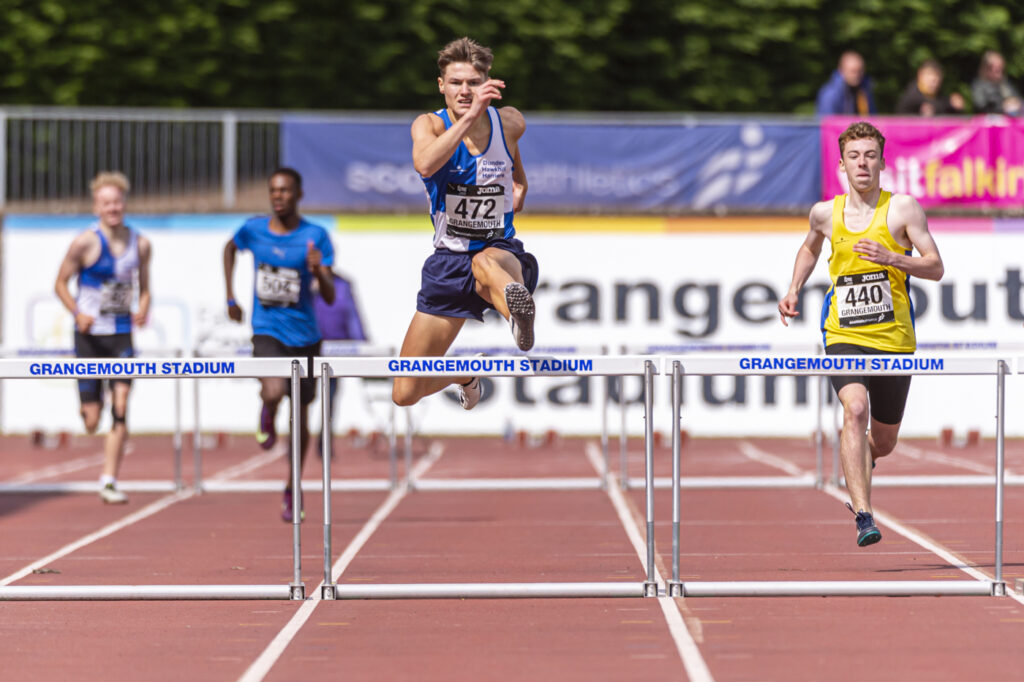