Top of the World (part two) 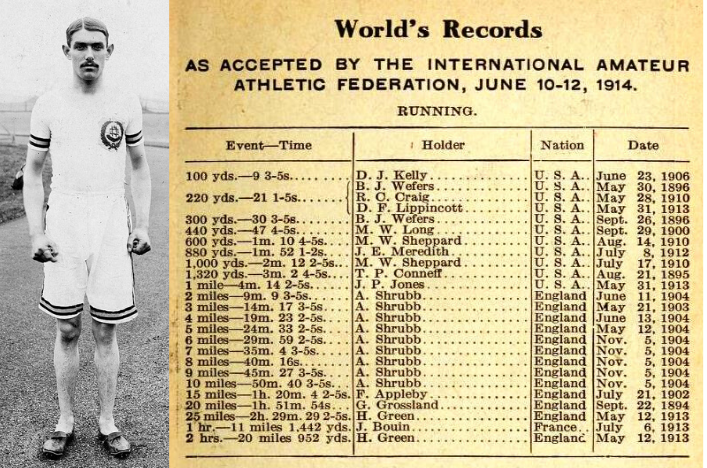 Above: Alfred Shrubb, and the first ever IAAF World Records, in which he features prominently

A companion piece to Top of the World.

In June 1914, the then recently formed International Amateur Athletic Association published the first official list of world records. This inaugural world record list included seven records set in Glasgow – all by the one athlete.

Alfred Shrubb of South London Harriers was also a member of West of Scotland Harriers. His amateur career lasted until 1905 (when he was 25) when he was barred from amateur competition for receiving payment. At the West of Scotland Harriers summer meeting at Ibrox Park on 11 June 1904, Shrubb entered the Two Miles handicap race against a field specially confined to the best Scottish distance men, of whom twenty-two were invited, with handicaps given of up to 260 yards. He started at a terrific rate, amid the cheers of those in the stand, picking off the first 440 yards in 60 seconds. Shrubb caught all the athletes in front of him and with half a mile to go was in front. P. C. Russell, of Bellahouston Harriers, made a plucky attempt to hold on to the Englishman, but it was useless; the London wonder paced on with marvellous judgement, and won as he liked in 9 minutes 9.6 seconds. The lap times went: 60 sec; 2 laps, 2:06; 3 laps, 3:15; 4 laps, 4:27 (one mile); 5 laps, 5:37; 6 laps, 6:49.2; 7 laps, 8:02; 8 laps, 9:09.6. The performance lasted as the world best for ten years until officially ratified as the world record.

Shrubb was back in Glasgow in November, competing at Hampden Park. This was a 10 miles track race, under Scottish AAA rules, billed in the programme as “A special attempt to create new World Records for 10 Miles and 1 Hour”. Shrubb later recalled: “I especially remember November 5th, 1904, when I established a new World Record over 10 Miles with 50:40 3/5 in the old Ibrox Park (sic) in Glasgow…. weaker opponents in this race had handicaps of up to 11 minutes. When I passed the finish, I was surprised to see the spectators urging me to continue running. I realised later that they wanted me to go for the 1 Hour record; this was a particular strain, as it meant I had to run another 10 minutes. I managed it, but with a bad stitch. Had it not been for losing 25 seconds at the end of the 10 Miles, through hesitation, the Hour record would have been something better”. On his way he set what were to be recognised as world records at 29:59.4, 35:04.6, 40:16.0, 45:27.6 and 50:40.6 6, 7, 8, 9 and 10 miles respectively.

His one-hour distance of 11 miles, 1137 yards was not recorded in the first world record list but it was subsequently ratified as the first one hour record as 18,742 metres. The six records set in this race saw him as the holder of eight world records set in Glasgow, along with 2 more set in England.

It was almost another 30 years before Scotland saw another world record, when another Englishman, Ernest Harper, a former AAA 10-mile champion, ran a distance of 33,653 metres (20 miles 1604 yards 2½ feet) over two hours at Hampden Park, bettering the existing world best of 33,251 metres recorded by the Finn, Taavi Komonen, two months earlier. The Scottish marathon champion, Dunky Wright, was one of seven in the race and after six and a half miles had been passed Harper was a lap ahead of Wright. At the end of the first hour Harper had covered 10 miles 1477 yards, 440 yards more than Wright. The pair continued to run together until 17½ miles had been covered, when Harper went out again, and at the gun he was almost 500 yards ahead of the Scot.

It was not until 1970 when another world record was set in Scotland, the only one featuring a Scot. Rosemary Stirling was preparing for the 800 metres at the Commonwealth Games at Meadowbank, where she won the gold medal, when she led off the Great Britain and Northern Ireland 4 x 800 metres relay team to their world record run of 8:27.0 at the British Games at Meadowbank on 13 June, beating the West Germans by 1.7 seconds. She ran a first leg of 2:06.0, followed by Sheila Carey 2:04.2, Patricia Lowe 2:09.8 and Lillian Board 2:07.0. The record would last less than three months before being beaten by a British quartet including Stirling and Georgena Craig in London with 8:25.0.

July 1970 saw the Commonwealth Games in Edinburgh produce one world record when the Jamaican Marilyn Neufville (who had controversially switched her allegiance from Great Britain) won the 400 metres in 51.0 (auto 51.02) by over 2 and a half seconds from Australia’s Sandra Brown, with Scots Barbara Lyall and Avril Beattie 5th and 7th.

At the Edinburgh Highland Games at Meadowbank on 21 August 1971, the great Belgian runner, Emiel Puttemans, won the 2 Miles in 8:17.8, beating Ron Clarke’s world record by nearly 2 seconds, and winning the race by 7 seconds from Brendan Foster 8:24.8 with Ian Stewart third.

Meadowbank attracted great competition in the 1970s with the European Cup final taking place at the stadium on 7th September 1973. The East European women were dominant in the throws events with the Soviet Union’s Faina Melnik adding 1.90 metres to her own world record, as she threw the discus 69.48 metres, just 90 minutes after Ruth Fuchs of East Germany flung the javelin out to 66.11 metres on her first throw to better her own world record of 65.06.

There has been only one outdoor world record set in Scotland since these days when Ireland’s Sonia O’Sullivan won the 2000 Metres at the TSB Challenge at Meadowbank Stadium on 8 July 1994 in 5:25.36, Yvonne Murray second in 5:26.93, also inside the previous world record of 5:28.69. This remained the world record until 2017 when Dibaba’s indoor run of 5:23.75 supplanted it.

The opening of the Kelvin Hall Arena in Glasgow in 1987 brought a new era of world stars to the country. The first world record to be established on the track was the USA’s 4×400 Metres relay record of 3:05.21 by their quartet of Clarence Daniel, Chip Jenkins, Kenneth Lowery and Mark Rowe in the match between Great Britain, USA and Russia on 10 March 1989.

The following year brought the European Indoor Championships to Glasgow. The Russian, Galina Chistyakova would not become the European champion – the triple jump was only an invitation event at these championships – but her fourth round jump of 14.14 metres was recognised as the inaugural world indoor record for the event. The next day, East Germany’s Beate Anders won the European 3000 metres walk title in a world record time of 11:59.36.

In the Great Britain v USA match in 1991, the British set a world record over 4 x 200 Metres of 1:22.11 with their team of Linford Christie, Darren Braithwaite, Ade Mafe, and John Regis all timed at sub-21, then three years later Colin Jackson equalled Greg Foster’s world 60 metres hurdles record of 7.36, having initially been given an outright record of 7.35 until it was altered on a re-reading of the photo-finish.

The Russians were regular visitors to the Kelvin Hall and the women’s pole vault was a particular favourite of the crowd. Svetlana Feofanova set a new record of 4.76 metres in 2003 but she could have chosen her words more carefully in her post-record interview when she said “I am very pleased to break the World Record. I always love to jump in England”.

13 years have passed since the last world record set in Scotland. The challenge is on for the Emirates Arena to produce the next one!