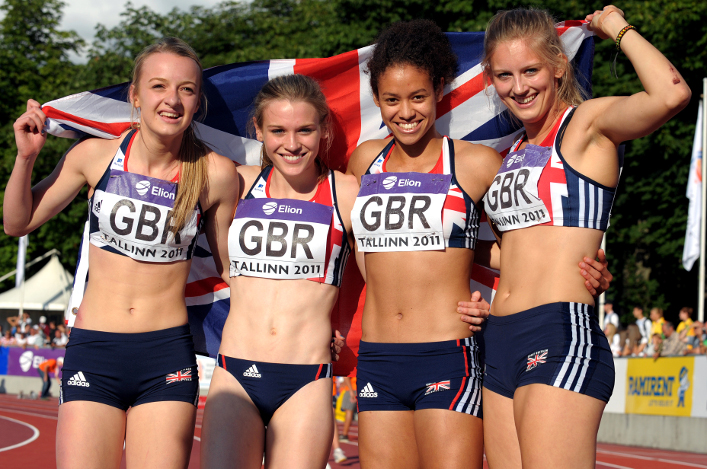 Above: The winning women’s relay team featured Kirsten McAslan (left) – thanks to Mark Shearman for the photo

As our under-23 athletes return from their European Championships in Gävle buoyed by the double gold medal winning performance of Jemma Reekie, so our under-20 athletes make the opposite journey to Boras to commence their challenge for the European Junior Championships.

Eight Scottish athletes make the trip, a total that matches the 8 selected Schwechat in 1983 (3 bronze medals) and is only bettered by the 9 who competed at the championships in Tallinn in 2011. How did those nine fare and how have their careers progressed in the eight years since?

It was the first international competition for all but two of the nine with Myra Perkins the truly experienced athlete, having competed in the hammer throw at the World Youth Championships in 2009 (9th) and the World Junior Championships (10th) the following year.

High jumper Emma Nuttall recalls “I remember being nervous but excited for the event as it was my first championship experience. It was an honour to be on a team like that and to see how championships work. I remember being disappointed with my performance, but I loved the whole experience. The impact for me was realising I wanted more of that, more of the championship involvement. It definitely helped inspire me to push harder and realise there was a potential for me to be a good athlete.”

Kirsten McAslan and Zoey Clark both won gold medals in the 4 x 400 metres relay but in different ways. Kirsten anchored the British team to victory in the final while Zoey gained her medal as part of the team that got through the qualifying round.

The championships were the springboard for tremendous relay success for Zoey, who has progressed to gold at the European Under 23s in 2015, silver at the Worlds in 2017 and at the Euro indoors this year in Glasgow, bronze at the 2018 World indoors and European Championships, as well as being part of the Scottish national record breaking team at the Commonwealth Games in 2018.

Kirsten was also in that European Under 23 quartet which won gold in 2015 and the Scottish record quartet in 2018, converting from 400 metres to the hurdles and reaching the semi finals at the 2018 European Championships.

Another relay medal was just missed by 0.15 seconds as the GB men’s 4×400 team, led off by Greg Louden, finished in fourth. Greg, a 400 semi finalist at the 2009 World Youths, was to go on to the Commonwealth Games in Glasgow in 2014 where he was part of the Scottish record-breaking quartet that finished fifth in the 4×400 final. Greg is now focusing on 800 metres.

High jumper Emma Nuttall had bettered the native indoor record with a 1.83 jump earlier that year but was unable to match that in Tallinn, clearing 1.77 in the qualifying competition and not reaching the final. The following year, she went to Trinity Western University in Canada, winning Canadian titles and setting Scottish national indoor records of 1.86 and 1.88 in 2014. Plagued by injury, she was still able to represent Scotland at the 2014 Commonwealth Games in Glasgow. She has graduated with a degree in history and has remained committed to the sport.

James McLachlan had set a Scottish under-20 long jump record of 7.63 metres prior to the 2011 championships but his season did not go quite to plan. He recalls his elation at being selected for his first GB vest and his nerves on arrival. He had torn his hamstring a week or two out and the British medical team did a brilliant job getting him in a fit state to compete. “I qualified for the final on my third jump and thankfully the hamstring stayed in one piece. I should note, during qualifying I spent 5 minutes measuring my approach on the wrong runway…”. James finished 10th with 7.42.

Like Emma, he suffered from injuries but competed two years later at the European Under-23s and then just missed out on selection for the Commonwealth Games in 2014, achieving the standard once rather than the required two times. After further hamstring injuries in 2015, the “continued injuries and a desire to make my own way in life and give my dad a break financially” led him to reduce his involvement in the sport. He is now a senior manager at Aviva working in data science and a sub-80 golfer.

Myra Perkins was eliminated in the qualifying of the hammer throw but went on to achieve a goal with selection for the Commonwealth Games in Glasgow in 2014 after throwing a lifetime best of 63.11 at the Loughborough international. She was one of the three Scots who all qualified for the final at Glasgow, Myra finishing 10th. Having competed in the sport from as early as 2004, she finally “retired” at the end of the 2017 year, now working as a development manager at Loughborough University.

David Vernon was the highest-placed Scot in the individual events at the European Junior Championships in Tallinn, finishing sixth in the 10000 metres. David captured two bronze medals at 5000 and 10000 at the Scottish championships in the following two years but career progression took over. He graduated from the University of Aberdeen with a MBChB in Medicine and now works as a doctor for NHS Greater Glasgow and Clyde, limiting his athletics activities to the very occasional parkrun.

The final one of our nine was Cameron Boyek, ninth in the 1500 metres. Cameron returned to Tallinn four years later to compete at the European Under-23s where he again showed his ability by qualifying for the 1500 final where he finished fifth. Injury caused him to miss the 2018 season, his last race being at the 2017 European Cross Country Championships at Samorin where he was part of the GB quartet who won the gold medal in the mixed relay.

We close on a gold medal performance. Not a bad way to hand over to this year’s class of 2019.

Back to Arnold’s Archive homepage

ENTER NOW for our next Lindsays Virtual Road Challenge

ENTER NOW
LINDSAYS VIRTUAL ROAD CHALLENGE
DECEMBER 4-7
We're taking entries online at the moment from all age groups from U11 through to Seniors/Masters for our next virtual road event.
It's happening over the weekend of December 4-7 and entries will close next Thursday (December 3).
scottishathletics.sportserve.net/pages/event/athleticsbookingdetails.aspx?id=11078 ... See MoreSee Less

MEDIA COVERAGE GB international @andoug_run has local focus for now after short-term move back to Caithness, as he… https://t.co/kBRFbuuqbt