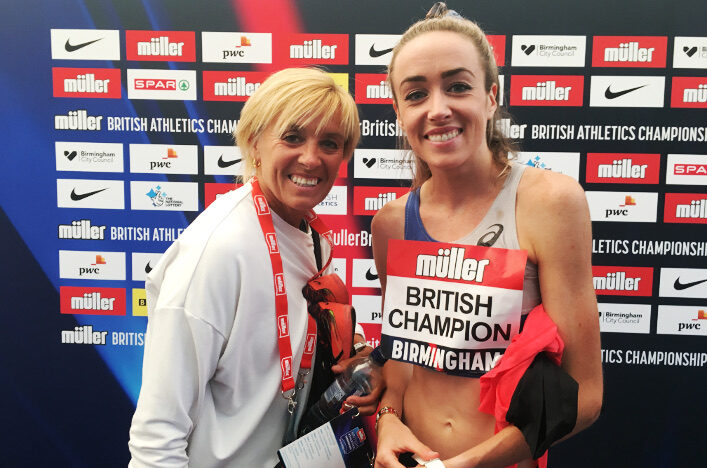 What is it about the women of Dundee? Two of our leading athletes, Laura Muir and Eilish McColgan, both members of Dundee Hawkhill Harriers, will be competing in Doha at this year’s IAAF World Championships – Eilish coached by mum Liz, herself another Dundee athletics legend (both pictured above at the 2019 British Champs).

No surprise, then, that Dundee women are a continuing influence on athletics in Scotland, stretching back to the formation of the Scottish Women’s Amateur Athletic Association in 1930. 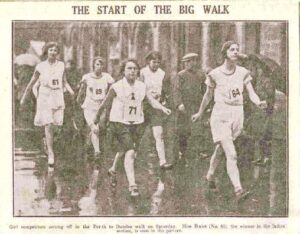 A few days prior to the formation of the SWAAA, Dundee women had featured prominently in the Perth to Dundee Road walk, an event that attracted 58 starters, where an 18-year-old Dundee clerk, Ina Buist (pictured far left in bib 61), attired in white skirt and silk jumper and stockingless, came in fourth overall and first woman in the field.

The very first event that the SWAAA organised was a women’s relay championship in the grounds of Bothwell Castle on 13 December 1930. Hawkhill Harriers put in a strong performance but missed out on victory to Shettleston Harriers by 15 seconds. The second team championship, in March 1932, went to Maryhill Harriers but Hawkhill’s Nan Robson was a convincing winner of the first individual cross-country championship.

By 1934, Dundee Hawkhill Harriers provided both the winning team and the individual champion in Mildred Storrar. Mildred also won the 880 yards on the track as well at the championships at Ibrox Park that year and was selected to represent Scotland in the event at the Empire Games in London in August, the first time that women’s athletics had been held at what is now known as the Commonwealth Games.

Unfortunately, Mildred collapsed in the final and, with similar results at the 1928 Olympic Games in Amsterdam, it was not until the 1960s when the 800 metres/880 yards were held at the Olympics/Commonwealth Games again.

The Second World War saw the SWAAA put into abeyance, not to be reformed until 1949, but before then, a Dundee doctor with an interest in athletics, Dr. J. B. Devine, formed the Dundee “Q” Athletic Club. (If anyone can tell me why it was named the “Q” Club, I would be very grateful).

By 1950, two of the club’s members, Patricia Devine, his daughter, and Elspeth Hay were competing for Great Britain at the European Championships in Brussels, becoming the first two Scottish club athletes (women) to compete at an international championship, if we discount the World Student Games.

By a quirk of fate, sprinter Elspeth Hay gained the honour of being the first home-based Scotswoman to compete for Britain as her heat of the 100 metres started approximately 45 minutes before Devine’s long jump competition. Both Hay (100) and Devine (long jump) won their events in the European Games trials at London’s White City Stadium with Hay’s all-round sprinting ability gaining her selection for the 100, 200 and 4×100 relay at Brussels.

In a very close-run final, the Dundee sprinter was just inched out of a medal in a blanket finish, placing 5th, but just 0.1 outside a bronze medal. Hay ran the lead-off stage in the British 4×100 relay team. After an excellent start from the outside sixth lane, she handed over a lead to hurdler Jean Desforges, with Dorothy Hall (3rd in 200) maintaining a metre lead over Russia to June Foulds on the final stage. Though Blankers-Koen brought Holland through to second with a storming run in the home straight, Britain held on to win by inches in 47.4, with Holland sharing the same time, just 0.1 ahead of USSR. Hay thus became the first Scotswoman to win a medal in the European Championships.

Devine and Hay showed their serious intent by moving to London, joining the Spartan Ladies club, and seeking stronger competition. In 1954, Devine, at the age of 22, competed as Scotland’s sole female representative in Vancouver, becoming the first Scotswoman to achieve the treble of appearing at the Olympic Games, European Championships and the British Empire Games.

Having finished 8th in the 1500 metres at the 1970 Commonwealth Games in Edinburgh, she was also in Edinburgh (as Christine Price) for the 1986 Commonwealth Games, having won the first two Scottish national 10000 metres titles in 1985 and 1986. She placed tenth in the 10000 metres that day behind the winner, Dundee’s Liz Lynch, Scotland’s sole athletics gold medallist at these 1986 Games.

There is not enough space in this article to give justice to the achievements of Liz Lynch/McColgan – World Champion at 10000 metres and Half Marathon, Commonwealth Gold medallist at 10000 metres in 1986 and 1990, Olympic silver, World Indoor silver, World cross-country silver. She took Scottish women’s athletics on to the World stage in a way no one had done before.

Since 1985, she has been the only holder of the Scottish national records at 10000 metres and marathon. She is joined in these national record lists by her daughter Eilish and by Laura Muir, both continuing and significantly adding to the remarkable influence of Dundee on women’s athletics in Scotland.

So we come back to the original question – what is it about the women of Dundee? Perhaps I’ll leave one possible answer to the good doctor, Dr J. B. Devine: “Dundee girls can lead the country in sports,” said Dr Devine. “they are strong, intelligent, and naturally good dancers. These are three qualities necessary for sportswomen.” 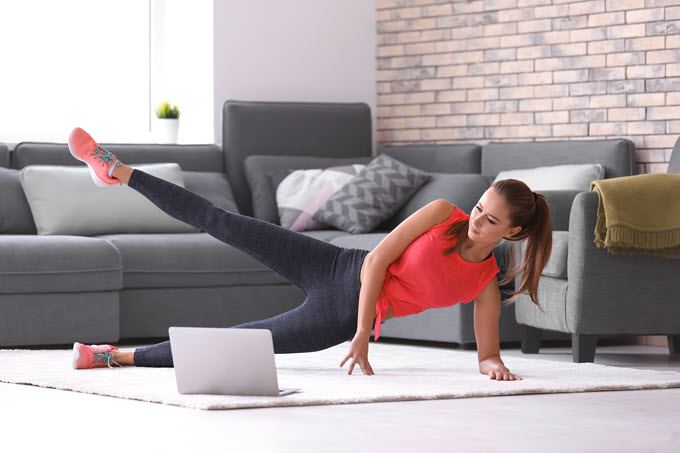 Stay In, Work Out at 7pm Tuesday; New date for Monument Mile; WHW Ultra is Off

Difficult times for clubs at the moment, here's how Aberdeen AAC have responded to the coronavirus crisis.
(Note that the filmed group sessions were filmed previously) ...

RT @AberdeenAAC: AAAC athletes: Show us what you are doing! 🏃🏻‍♀️🏋🏿‍♂️🏃🏽‍♂️How are you keeping fit and staying active? What are you doing…

RT @Jcolquhounr: So so true, young athletes, keep ur heads down and keep working, play the long game and come through when it matters most.…

RT @NessHalfMar: We wanted to share some photos from the #InvernessHalfMarathon & 5K which took place earlier this month 👉https://t.co/NEnn…